Trump’s losing at politics, ignoring democracy, declaring an emergency where no emergency exists.

Like it or not, we’re getting a lesson in fascism.

I’m reading Madeleine Albright’s Fascism: A Warning. No, it is not a Trump-bashing tell-all. It barely mentions him.

But like the title says, it warns democratic countries to learn from the mid-20th Century how to recognize fascism fomenting within our midsts.

People bandy the word fascism about without understanding what they mean. I should know. I was such a bandier.

Even with its meaning unclear, the wallop the word packs is very clear. It’s abrasive. It’s insulting. It’s a discussion-ending way to say “You’re wrong.”

The word fascism gets attached to all sorts of inappropriate definitions. Anything from socialism to corporatocracy to communism to capitalism to democracy to elitism. But the truth is each of these isms have been fascism’s target at one time or another.

Fascism: A Warning provides historical perspective to the question What is Fascism? The history Albright outlines taught me a few things.

Democracy teaches us to dream. A healthy democracy also teaches us to enjoy the here and now. A society that focuses on optimism and the good life of being alive, that’s democracy. A society geared toward grasping and jealousy of the other, that’s fascism. 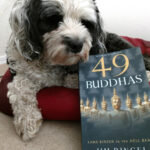